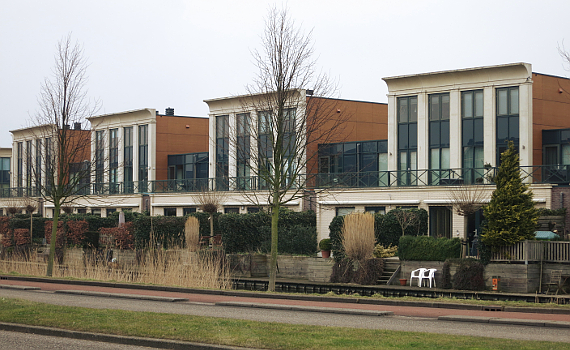 Vroonermeer is a quiet new neighbourhood on the outskirts of Alkmaar. Many homes are located next to the water or the green. Road safety and privacy are important starting points for the development of Vroonermeer. Vroonermeer-Zuid is designed as a car-free neighborhood and Vroonermeer-Noord will have a more rural character. The building of Vroonermeer-Zuid was completed in 2005 and has 1,230 homes. Vroonermeer-Noord is still on the drawing board and is expected to count slightly more homes. Police figures show that there is little crime in Vroonermeer-Zuid. There are some reported cases of incivilities, but the risks of theft, vandalism and violence are much lower than in the rest of Alkmaar and the rest of the Netherlands. Still, it is unsure whether this situation will remain. Vroonermeer is after all a child-friendly neighborhood and it is possible that youth related issues will rise when these children grow older. In addition, a preliminary study of the Social Security Urban Development project shows that many Vinex neighborhoods have a spatial structure comparable to older neighborhoods where relatively many problems with crime and nuisance are present. In order to see if this is also the case in Vroonermeer and whether improvements are possible in the plans for -Noord and the existing situation in -Suid, the municipality of Alkmaar has decided to participate in the project for Social Security.

Vroonermeer-Zuid’s auto-run design has a major impact on its spatial qualities. The neighborhood has only been unlocked on one side (in the north) for the car and the street pattern has been cut into two places, reducing access to car traffic even more. In South, the routes for car traffic and slow traffic are largely separated. In North this is not the case and (according to current plans) all streets will be accessible both for fast and slow traffic. The homes in Vroonermeer all comply with the requirements of the Political mark Safe Wonen®. However, visibility is not as good at all places. Many homes target the entrances mainly to the side streets and not to the public spaces and main roads. The green zone in the middle of Vroonermeer-Zuid is fully flanked by the leading sides of houses. The houses on the main street (the Multatulil Avenue) have hardly any relation to this street. For pedestrians and cyclists, Vroonermeer has enough potentials for vital street life, but this quality is now insufficiently due to the low accessibility of the neighborhood and the lack of meeting places. The area between Vroonermeer-Noord and -South has all the advantages in terms of space to connect between the two neighborhoods and become a place for meeting and business. The development and design of this area can be utilized.

The analysis has shown that the greatest chance of an increase in vitality and vitality in Vroonermeer lies in developing a central meeting point in the space between the two neighborhoods. The development of this ‘intersection’ with De Keesman with features and facilities connects the two neighborhoods. The place can transform into a readable and attractive entrance to the Vroonermeer; a center knot and meeting point for nearby people and the surrounding area. There are good opportunities to increase the accessibility of Vroonermeer-Zuid, to create opportunities for activity and meeting in -Noord and to realize a new local center between Vroonermeer-Noord and -Suid. These interventions are expected not only to improve social security conditions, but also to improve the spatial qualities and viability of Vroonermeer.